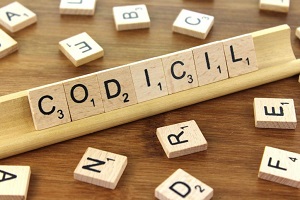 How To Update A Will

You have two options when it comes to how to update your will: revise your existing will, or create a new one. You can either make a codicil to your existing will or make a new will. Both require your signature and the signatures of two witnesses.

Codicil
If the changes are few and minor, you may not need to redo the often lengthy entire document. An amendment called a “codicil” can suffice. If you use this instrument you can change or delete specific sections, or add new terms and adjust for new assets. To create a codicil, you write down what you want to remove or add to your existing will, sign it, have two witnesses sign it (as you did with your original will), and then keep it with your will. After your death, your two documents will be read and interpreted together. This is a separate legal document, essentially like an amendment to your will, that will add to your original will.

A codicil can also act as a failsafe for your original will. If someone sucessfully argues that you weren’t in the right state of competency when you made your codicil, someone in your family can contest and overturn the codicil without having any effect on the original will.

Because a codicil needs to clearly reference a specific portion of your will that it’s amending, ask your attorney to prepare any codicils rather than trying to do them yourself, no matter how simple it may seem to just write or type a couple of lines of text because the smallest mistake can make them invalid.

Indeed, in many cases it makes more sense just to make a new will. Revoking the old will and making a new one will reduce the possibility of any confusion that could come from having an add-on to your will. (With a new will, there will be no extra pages to be lost or misconstrued.)

Also, if your will was created using computer software, making a new will could be simpler than making a codicil. For example, if you made your will this way, your information is stored within the program, so making a new will is as easy as, making the changes, printing it, and having your new will witnessed. (Your attorney doesn’t need to have an entirely new will typed like in the pre-computer days).